First, the digital industry explained to content producers and distributors that they had to offer their products for free on the web and monetize them through advertising. Now, it also wants to suppress this revenue stream. This is absurd from both a business and moral standpoint.

In business terms, the development of ad-blocking systems* – which are regularly used by over 200 million people worldwide (see graph below) – poses a bigger threat in the short term to the media than to digital advertising giants such as Google.

ProSiebenSat.1, a German company, is one of the few media outlets to provide data on the business impact of this phenomenon. In 2014, it cost them a fifth of their web revenues. This is obviously a heavy burden when media entities are already struggling to survive in a digital environment that destroys their traditional business model. 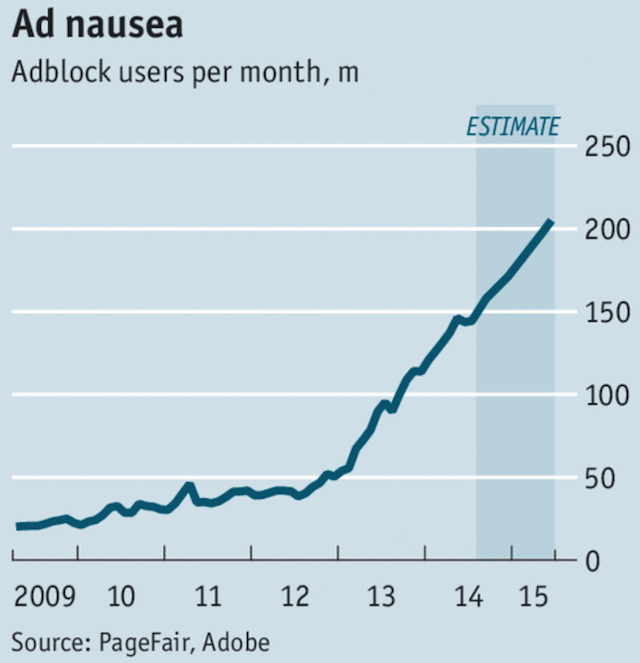 In moral terms, ad blocking is nothing but a hypocritical act of piracy. I cannot understand why it is illegal to download bootlegged movies but it would be legal – even in vogue – to use ad-blocking software. Ads are to websites and mobile applications what the purchase of movie tickets or DVDs is to movies: The best way to monetize content production and distribution.

Furthermore, advertising contributes to a media’s overall value proposition** and thereby plays a role in the websites and mobile applications that people choose to use. Nobody forces us to consume media whose ads annoy us.

This is why I support the media organizations that take the most drastic measures against ad-blocking software users. The media industry must act quickly because the millennial generation is at the forefront of the adoption of ad-blocking systems. The growth of native ads – since their format and location are identical to those of non-commercial content, they can’t (yet?) be blocked – will not be sufficient to save media outlets and applications developers from the ad-blocking gloom.

Rather than trying to educate digital audiences***, the best strategy is that employed by media entities such as Hulu that block users who block their ads or significantly degrade their user experience.

Legal action, indeed, doesn’t seem to be a viable option. In Germany, several media have sued Eyeo, the world leader in ad-blocking software. Surprisingly, the courts ruled that its business is legal even though it boils down to knowingly preventing companies from legally monetizing their work.

And an even greater danger lurks: Shine, an Israeli company, offers mobile-network operators a solution that, although it violates the principle of net neutrality****, would block ads before they reach their subscribers’ smartphones.

* Ad blocking solutions, the most popular of which is Eyeo, are now easy to install on smartphones and computers alike, which speed their adoption by Internet users.

** Its quality generally varies with the content to which it is associated: In a newspaper for example, the ads published next to the sports pages are different from those associated to the business section.

*** Ad-blocking software users who visit the Guardian‘s website are greeted with the message: “We notice that you’ve got an ad-blocker switched on. Perhaps you’d like to support the Guardian another way?”

**** The principle of equal treatment of all data traffic on the Internet.

Mobile Applications Account For Half The Time Spent Online

The Secret To Being Well-liked By Your Peers, Employees And Bosses

3 thoughts on “Ad Blocking Is Piracy”

Right, I can hear your point.
However, it is worth mentionning also:
– that announcers bear a responsibility to target their ads and not disrupt the user experience (which is sometimes the case, even up to the point that you are unable to access the content)
– that users sometimes pay for content (yes, yes… amazing). When I subscribe for Les Echos for instance, I don’t expect pop-ups to spoil my reading.

Creative accounting was used here. Surely this is a parody.

The companies buying advertising views have a set budget and so there is a fixed amount of money. That money is spread out amongst the websites serving up the adverts. The adverts are served up until the money is used up. Ever wonder why some sites showing adverts “run out” some days, its because there are no more adverts to show.

Until most people use ad blocking all adblock does is ensure the people who are willing to see adverts see more and the ones who would ignore the adverts anyhow do not use up, or waste, the allocation of advert views.

The same money is spread around to the sites, and actually the advertises get better results by not wasting advertising money on those who will not take notice of the advert anyhow. The sites as a whole still use up the allocated views and get same money as a whole.

With adblock value per view is higher, advertiser pays more per view.

Without adblock value per view is lower and advertiser will only pay less per view.

This is why the article uses creative accountancy. Also the figure for users of adblock is directly based on individual downloads of adblock. But how many people d/l adblock many times, each time they upgrade/buy a computer, use both chrome and firefox, also install on desktop and laptop and tablet. In other words one user could download upto 6 copies of adblock per year. That 200 million is likely to be a lot less and the rapid increase is likely to be the uptake of tablets by users who also have phone and desktop.