From the Congress of Vienna to a global digital forum.

Last week, American and Iranian Presidents Barack Obama and Hassan Rouhani had a historic phone conversation, the first top-level contact between the two countries since 1976. President Rouhani’s Twitter account recounted the conversation’s major topics and exchanged a few polite greetings with that of Barack Obama. These tweets were later removed by the Iranians but not before BuzzFeed took a screenshot (see below). 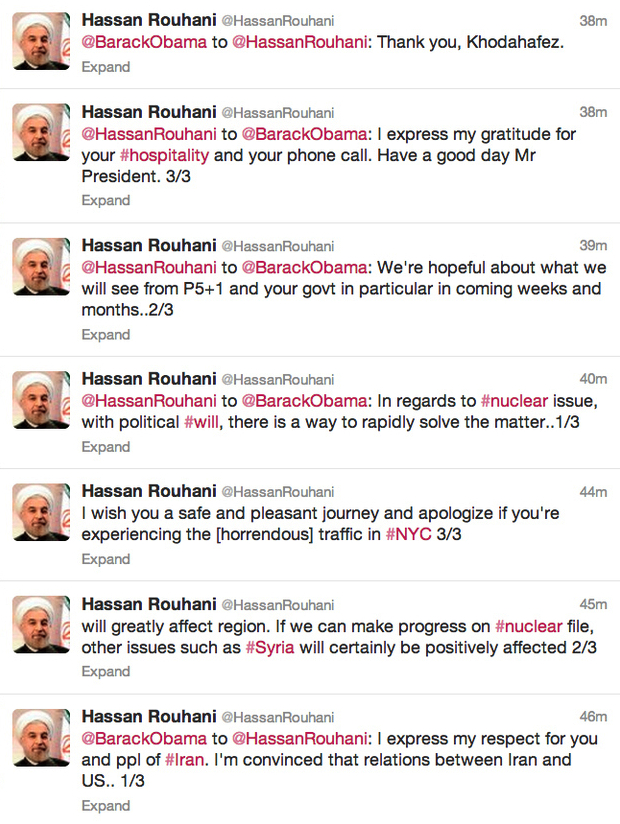 Then, last Tuesday, Jack Dorsey, Twitter’s creator and Executive Chairman, asked Hassan Rouhani whether or not his countrymen could read his tweets. The Iranian President, or more likely one of his advisors, replied with a hopeful message and a surprising mastery of American abbreviations (see below). A few years ago, such a behavior on a social network would have been unthinkable from the leader of a dictatorial regime.

In international relations, any public expression is of geostrategic nature.

The example of Hassan Rouhani provides the best illustration. He was elected President of the Islamic Republic of Iran in an election whose candidates had previously been selected by the Guardian Council of the Constitution according to their allegiance to the Supreme Leader, Ali Khamenei. Rouhani was probably elected by the Iranian people because he was the most moderate candidate.

Battered by Western-led sanctions, Iran is in a very difficult economic and social situation. In this context, the openness shown by President Rouhani may result from his desire to reduce the burden of these sanctions or, in a more Machiavellian manner, buy time to pursue Iran’s nuclear program.

Whatever the case, Iran-US relations have resumed at the highest level for the first time in nearly forty years. John Kerry met Iranian Foreign Minister Mohammad Javad Zarif face-to-face last week. However, we can assume that a public handshake between Obama and Rouhani would have been unacceptable at this stage for the Islamic Republic’s hardliners.

In this regard, Twitter provides an ideal vehicle for the Iranian President to communicate a change in direction compared with his predecessor. Hassan Rouhani’s tweets will not change the life conditions of Iranian citizens. But they illustrate the regime’s political evolution. In doing so publicly, they constitute a major international milestone.

Twitter thereby turns the elitist Concert of Nations in which international relations were reserved to diplomats into a planetary community where each Internet user is watching the world’s affairs.

With Twitter, we are shifting from the Congress of Vienna to a global digital forum.

With Twitter, we are shifting from the Congress of Vienna to a global digital forum.

The Secret To Influencing A Narcissistic CEO