In Defense Of Risk-Taking

An article recently posted on the Harvard Business Review‘s blog struck a chord in me. It stresses that, often, a corporation’s “core control mechanisms — the means by which it decides how to allocate resources, start and stop projects, and so on — are organized to do one thing: Minimize mistakes”. These companies are characterized by a decision making process based on consensus and hence on many meetings.

As stated by the article’s author, such a mechanism is not wrong in itself, especially when the problems at hand can be precisely defined. In some cases, it can even help avoid some costly mistakes. However, companies that focus their operations on minimizing mistakes have limitations, all the more if they operate in markets undergoing major changes – which is the case today of a growing number of industries in our so volatile world. 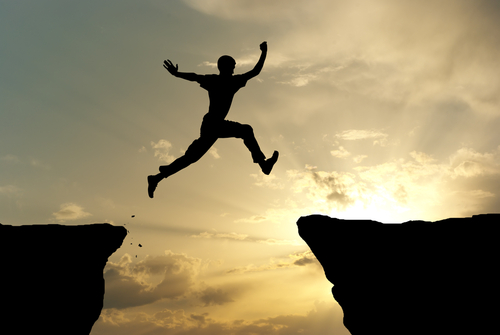 About a week ago, I made a (long) presentation to a communications agency that will now work with us in order to give them detailed knowledge about the company I work for, the program they will support and the “seven principles to work well with me.” One of those principles is risk taking.

I completely agree with Silicon Valley’s saying that, if you are not failing some times, you are not taking enough risks. But in order to take risks, one must work in an organization that encourages – or at least tolerates – this behavior.

I don’t think that such an organization is fundamentally more courageous than the others; it is only more lucid. As a matter of fact, all human beings make mistakes. Minimizing risk by fear of making mistakes is wishful thinking. Hence, it’s better to make mistakes by taking risks – i.e. by creating more opportunities to improve or even take it to the next level – than by being careful.

In this regard, as I have already stressed on Superception, I like to conduct experiments which I consider the airbag of risk taking: When you conduct an experiment, you try something new but you limit its potential negative effects by restricting its scope.

Last but not least, risk taking is the best remedy I know against boredom. 🙂