Book Review: “The Conviction Of Richard Nixon: The Untold Story Of The Frost/Nixon Interviews” By James Reston Jr. (2007, 207 Pages)

You should be convinced by the conviction of Nixon.

John Reston Jr. is an American author and journalist who assisted David Frost as an adviser and researcher for the preparation of his 28-hour interviews with Richard Nixon.

In this book, he describes the behind-the-scenes story of what may be the most famous TV interview – and apology – ever. 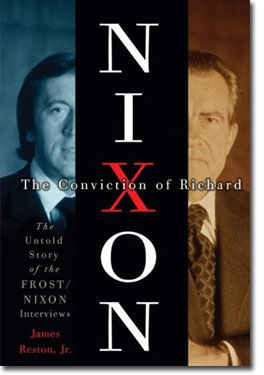 As Reston writes, “the Frost/ Nixon interviews would include the only trial over Watergate that Nixon would ever endure. It would be a trial on television, part history, part show business, part inquisitional sport. This bout of heavyweights remains the most-watched public affairs program in the history of television. More than 45 million people tuned in.”

Once you get over the obvious bias and self-serving nature of the book, this is a great read for anyone interested by American history, human tragedy, and TV.