The biggest winner of the London Olympics may very well be a loser.

Many events and athletes have left a mark on the 2012 Olympics. For my part I would highlight a podium made of Michael Phelps (18th gold medal and 22nd Olympic medal), Allyson Felix (3 gold medals in three different distances), and Gabby Douglas (two gold medals in the discipline that impresses me the most), three athletes who, beyond their exceptional results, embody values that move me.

But these Games have also been marked by an athlete who has gained nothing other than the respect and admiration of most of his contemporaries: Oscar Pistorius, “the fastest man with no legs.” Born without fibulas, Pistorius had both legs amputated at 11 months. In London, he recounted that his mother used to tell every morning, “Carl, put on your shoes. Oscar, put on your legs.” Thus he had the impression, as a child, that he simply had different shoes.

To me, it is the best message one can convey on disability. In the same vein, the picture of a quadruple amputated girl with Pistorius (see below) is the most beautiful image that has (re)emerged during the Olympic Games, even though it is not related to the competitions.

Notwithstanding that he was unable to qualify for the 400 meters final, the images of Pistorius running alongside “able-bodied” athletes were the most inspiring ones of these Games for tens of millions of people with disabilities around the world. And the fact that Pistorius had to lobby long and hard in order to take part in these Games once again illustrates the International Olympic Committee’s aloofness. 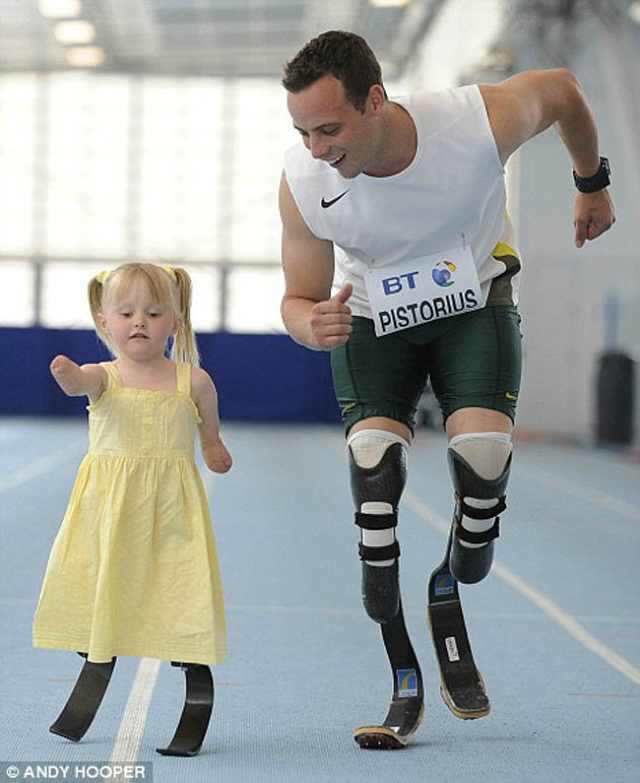 If the Olympics are really carrying a message of peace and unity throughout the world, there is indeed no reason why this message should be limited to relations between nations and not include relations between individuals.

In this regard, I am shocked that Paralympic Games’ athletes are not associated to the opening and closing ceremonies of the Olympic Games. Certainly, the Paralympics have their own ceremonies but these ceremonies cannot be compared to the spectacular shows that open and close what many still consider as the “real Games.”

I would even go further and make a proposal to the International Olympic Committee: Bring together in one event the Olympic and Paralympic Games. The competitions would remain distinct but take place at the same time for each discipline. Thus the sports and human jamboree would be common to all athletes. There would no longer be games and sub-games, athletes and sub-athletes. Because able-bodied or disabled, all Paralympic and Olympic put the same level of effort into their training and have the same love for their sport. There is no reason they cannot share this love between them and with us.

North American author Mark Yarnell wrote that a leader is someone who demonstrates what’s possible. This is the management lesson that Oscar Pistorius taught us in London.

Book Review: “The Zero Marginal Cost Society: The Internet Of Things, The Collaborative Commons, And The Eclipse Of Capitalism” By Jeremy Rifkin (2014, 368 Pages)

Productivity And Creativity Do Not Mix... And That's Great!