On the relationship between disabled and non-disabled people.

April Holmes is a paralympic athlete and world 100-meter champion in the category of lower-limb amputees.

In 2001, she had a horrific accident while taking a train from New York to Philadelphia: The train car doors were shut before she could get on board. She fell from the platform and one of her legs got trapped under the train. She had to be amputated. 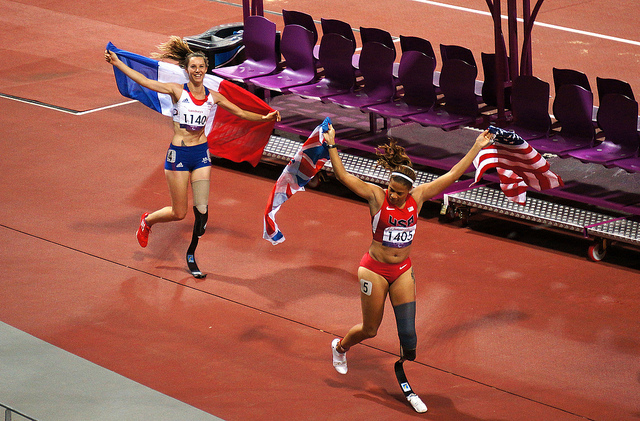 I read about April Holmes’ story a few days ago in Hemispheres, United’s in-flight magazine. Incidentally, it’s sometimes beneficial to not be allowed to use electronic devices during takeoff and landing.

In this interview, April Holmes says the most beautiful thing on disability, a subject that I am extremely sensitive to: “We all have limitations. The difference is most people don’t have their limitations broadcast to the world.”

There is no perfect human being. Each of us has intellectual, mental and/or physical weaknesses. That is why the way we look at people with disabilities should be focused on the uniqueness of the human condition rather than their differences towards us.

Even if driven by the best intentions, pity often goes hand in hand with an unconscious feeling of superiority that should not exist. Certainly, we have the immeasurable chance to be able to hide our shortcomings. But that’s no reason for us to believe that we have none. Believing so would be deceiving ourselves and thereby diminishing our supposed potency.

Book Review: “Big Data: A Revolution That Will Transform How We Live, Work And Think” By Kenneth Cukier And Viktor Mayer-Schönberger (2013, 257 Pages)