To Be Taken Seriously, The Press Must Be Serious

FORTUNE has published its ranking of business’s hottest stars under 40 (“40 Under 40“). It’s not that hot.

This list once again demonstrates the ability of Marissa Mayer, who holds the top spot (see below), to turn media heads.

Marissa Mayer has never created a business nor even invented a product. She hasn’t yet produced any tangible result at the helm of Yahoo! She spent a fortune on acquisitions but hasn’t defined a compelling strategy nor revolutionized the products and services of the Company nor grown its business and profitability. She isn’t a management icon (read here and here). Last but not least, the increase of Yahoo’s share price since her appointment is above all the consequence of the valuation of the Company’s Asian assets acquired by Mayer’s predecessors.

One might expect a magazine such as FORTUNE to rank business’s hottest stars depending on their ability to create value. In this regard, the top-3 alone is so funny that it is ridiculous: Mayer ranks first before Jack Dorsey (inventor of Twitter and Square, no less) and Mark Zuckerberg whose Facebook is changing the world and producing financial results that many thought impossible. Even if she manages to turn around Yahoo!, which is not at all clear at this point, Marissa Mayer will be remembered as an asterisk in the history of American business compared with figures such as Dorsey and Zuckerberg. Incidentally, the FORTUNE staff seems to be skeptical of their own ranking since they put Dorsey – not Mayer – on the cover of their “40 Under 40” paper edition (see below).

Mayer is an asterisk in the history of business compared with Dorsey and Zuckerberg. 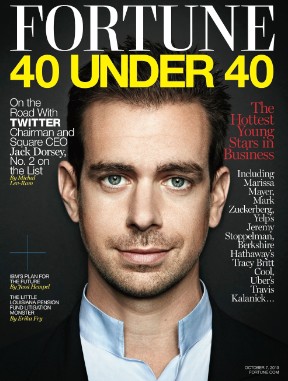 To take only a few striking examples, Marissa Mayer doesn’t even deserve to rank ahead of entrepreneurs such as Brian Chesky, Joe Gebbia and Nate Blecharczyk (the founders of Airbnb, ranked sixth), Travis Kalanick (founder of Uber, thirteenth), Aaron Levie (creator of Box, fourteenth) or Jonah Peretti (founder of BuzzFeed, twenty-sixth). These entrepreneurs have in common that they have developed and are successfully implementing a vision that creates value, something Marissa Mayer hasn’t yet achieved.

FORTUNE‘s ranking might not seem so important to you. But the fact that a renowned business magazine produces a ranking whose credibility is similar to that of the cutest cats on the web reflects on the lack of seriousness of some news media. This ranking may allow FORTUNE to increase the traffic on its web site and sell more print issues in the short term but it certainly won’t help boost the reputation of seriousness of the press in the long run. Print media are digging their own grave when they are countering their low-quality competitors with equally low-quality reporting. Their high operating costs only make sense if they are used to produce valuable editorial content.

The Often-Forgotten Factor In Performance Management