It is time to stop accusing the digital revolution of spreading fake news and to examine our own responsibilities.

What Is Fake News

Internet users are increasingly inclined to call “fake news” any information that they dislike. Fake news, that was originally a category of analysis, is thus in the process of becoming a disqualifying insult, which doesn’t help understand the phenomenon.

In fact, fake news is hoax information presented as true by deceptive websites. Political leaders do not create fake news in the strict sense of the term.

A study conducted by a collaboration of researchers from the universities of New York and Stanford sheds light on fake news’ impact on voters.

They surveyed over 1,200 American Internet users to whom they showed several pieces of news, and asked them if they had seen it and, if so, what effect they had had on them.

The information they showed them was of three types:

The most important – and most alarming – conclusion of the study is that the proportions of people who remembered seeing and believing real fake news (15.3 percent and 7.9 percent respectively) and “fake fake news” (14.1 percent and 8.3 percent) were substantially the same.

As a matter of fact, 8 percent of voters base their opinions more on their prejudices than on the information they are exposed to. They believe any information, whatever its veracity, that corresponds to their bias.

Less than 10 percent of the population are enough to make a difference in an election, all the more since those polarized voters show up in great numbers on Election Day. 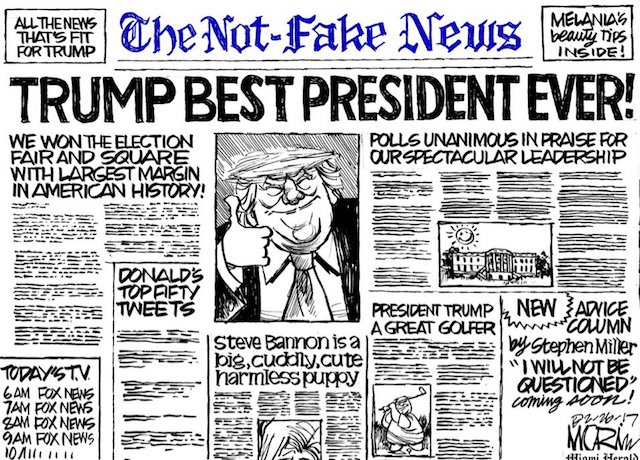 There are countless studies that demonstrate that people fail to make appropriate revisions in their beliefs once those beliefs have been refuted. In a new book, “The Enigma Of Reason,” two cognitive scientists, Hugo Mercier and Dan Sperber, explain this phenomenon. They emphasize that reason was acquired during human evolution.

In the African savannah, the main asset of our ancestors compared with their predators was their ability to cooperate. But cooperation with others is not natural to human beings. This is why reason developed not to enable our forefathers to solve abstract problems but to promote collaboration.

Mercier and Sperber write that,

“Reason is an adaptation to the hypersocial niche humans have evolved for themselves.“

Confirmation bias, which they call “myside bias,” prevents us from getting screwed by other people. It explains that our reason is more adept at detecting the defects of someone else’s thinking than of our own. In the African savannah, that ability ensured that our ancestors weren’t always those, within their group, who risked their lives on the hunt.

As Hugo Mercier and Dan Sperber point out, our environmental evolution has moved too quickly for the human species. Today, confirmation bias weakens democracy.

It is true that the Internet provides the channels necessary to the spread of fake news. But technology is only a means. It is our irrefutable subjectivity that gives fake news its momentum and reach.

This is why blaming the Internet for the impact of fake news is as justified as blaming one’s car dealer for speeding.

The Height Of Success Is To Contemplate One's Own Failure

Could Experiential Marketing Be More Powerful Than E-commerce?