One of the greatest mountaineers of his generation was killed in the Himalayas in a fall of 3,000 feet while pursuing the only quest that is worthwhile to me: That of his own limits1.

He was training on Nuptse (25,791 ft) in view of his next challenge: Attempt to summit Everest (29,029 ft) by the never repeated West Ridge/Hornbein Couloir route, then descend to the South Col before taking the once climbed direct line just below the Lhotse Ridge to gain that summit (27,940 ft).

Ueli Steck had brought extreme alpine climbing to an unprecedented level of speed. From Eiger to Annapurna, he had achieved a series of solo speed records on always more difficult and dangerous faces. The silly nickname – “the Swiss machine” – that was given to him reduced Ueli Steck to an alpine robot with superhuman physical abilities. But he also demonstrated unique climbing skills and mental strength in his unprecedented ascents.

The death of Ueli Steck touched me more deeply than I had expected. 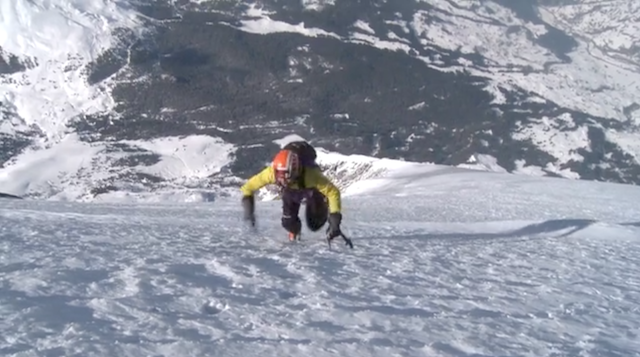 Having almost died in a rock-climbing fall, I have experienced that moment when one goes down a vertical wall without any protective gear. That moment is, by definition, very short but it happens in slow motion. I was lucky enough to be saved by a little miracle but the feeling associated with the deadly fall has remained with me since then. As a result, I am very sensitive to stories of mountaineers dying by falling into the void.

Furthermore, I admired Ueli Steck’s approach in life. He was only motivated by competition with himself. That is also what drives me (see my TEDx Talk – in French), even if I have achieved far less remarkable accomplishments.

In this video, Ueli Steck tells, in a very moving way, that he had slipped into a deep depression after his solo ascent of the Annapurna, for he was conscious of having reached the utmost limits of his art. It may be the desire to surpass his limits and to break that psychological impasse that led him to devise an even more ambitious project and perish on Nuptse. Yet, he knew that he would die if he kept taking greater risks while trying to surpass himself.

1 The quest for one’s limits is a very personal project. It can relate to all kinds of activities and circumstances.

The Perception Lesson Of The North Face's Boss