Much more often are CEOs appointed because they are cutthroat alpha males than because they engage and unify their employees.

Yet wouldn’t corporations – and the world – promote more human values and create more economic value if CEOs were chosen on the basis of their ability to unify rather than divide?

A study carried out by Glassdoor, a website that allows employees to publicly rate their working conditions and company executives, helps to quantify that added value.

Glassdoor analyzed the data posted by 615,000 of its users. 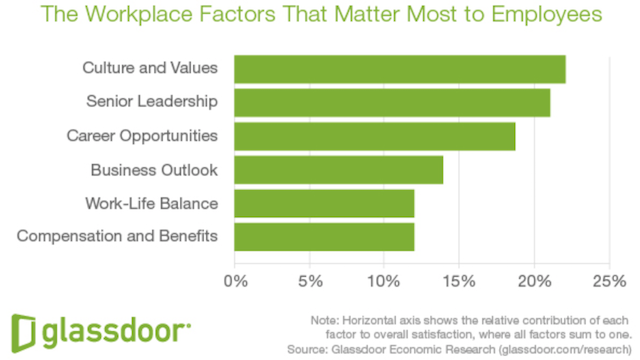 It appears that the most decisive element in their view of their job relates to the culture and values of the company for which they work (see the graph above). Incidentally, that finding is consistent with the managerial approach that I have been relentlessly promoting on Superception since the creation of my blog.

The second most important criterion relates to the managers’ behavior. That is logical, if one considers that a manager’s primary role – at least the most visible to their employees – is to embody on a daily basis the culture and values of their company.

The results of the Glassdoor study are confirmed by another research carried out by Gallup: It shows that employees’ commitment to their work depends for at least 70 percent on their manager’s behavior.

It is no coincidence that Gallup estimates that management deficiencies in American companies annually cost the national economy between 319 and 398 billion dollars.

What is their cost for your company?