Sometimes the only way to reach witnesses of events as they happen is to talk with them on the micro-blogging site. What are the long-term consequences of this evolution for journalists?

A week ago hostages were taken in a burglary. The situation took place in a shopping mall in Westchester near Los Angeles. As FishBowl LA reported, about 200 people were trapped in a cinema nearby during the intervention of the police squad.

What caught my attention is that a BuzzFeed journalist communicated on Twitter with some of these people in order to report on the event: 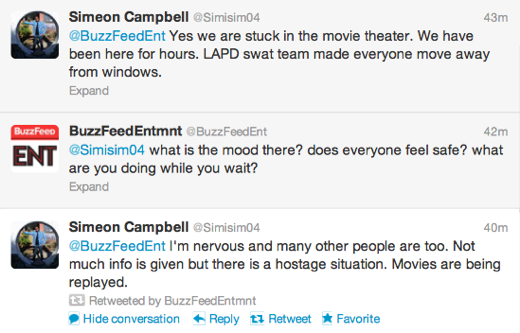 This anecdote is representative of Twitter’s potential role in the future to facilitate journalists’ access to newsmakers or witnesses that they could not get access to otherwise.

The risk is of course that Twitter would eliminate the mediating role of the journalist, newsmakers and witnesses recounting live on the micro-blogging site what they do or see. We have already seen such situations occur in cases as famous and diverse as the killing of Osama bin Laden or the death of Whitney Houston. But what news witnesses wrote on Twitter in these instances was then augmented and propagated by journalists.

Will this role survive the commoditization of Twitter (or its successors) in the general public? The answer lies in the value that journalists will add – or not – to the news. Today, the journalists’ added value on Twitter can be limited to the confirmation and propagation of news reported by others. Tomorrow, this dual role may be unnecessary and journalists will have to make sense of the news in order to remain relevant.