This book won’t keep you under tension! In this article, I review this book and share a few thoughts re: the moderation of the 2012 presidential and vice-presidential debates.

Jim Lehrer is an American journalist who has moderated 12 presidential or vice-presidential debates between 1988 and 2012. This book tells the story of 11 of these debates.

Unfortunately, it is a litany of well-known highlights from these debates and worthless anecdotes. Hence, I (almost) didn’t learn anything reading this book. 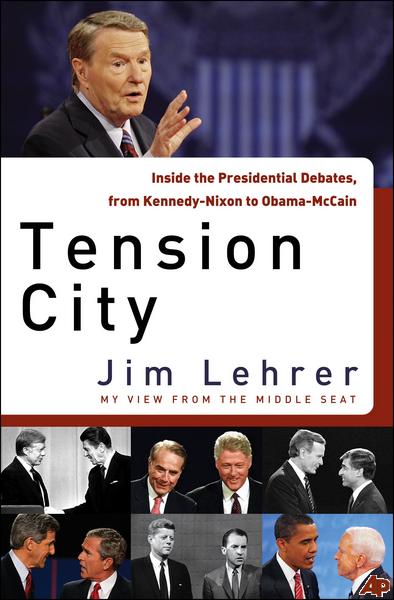 The only interesting section is Lehrer’s stance on journalism at the very end of the book. I am quoting a few lines here in tribute to this great journalist and because I fully agree with his point of view:

“At the University of Missouri School of Journalism in the 1950s, I learned that the major missions of journalism are to collect, report, and explain. I took no classes in judging answers and people, column writing, commentating, being a pundit, or expressing opinions. I honed an even-handed approach to interviewing and reporting through ten years as a daily newspaper reporter/editor and ever since in my practice of journalism on public television. Thus, “fair and balanced” is not a slogan to me. It’s a professional way of life.

I think it is safe and proper to note that all reporters—print or electronic—are not automatically suited to be moderators. Asking questions to get information for a story can be quite different from asking them to help voters understand what a candidate believes and stands for—and why.”

Jim Lehrer was roundly criticized for being absent – even more absent than Barack Obama, which is saying something – in the first debate between the President and Mitt Romney held on October 3rd in Denver. Even if Lehrer applied his core principles, it is true that he was too apathetic – rather than too neutral – in the moderation of this debate, asking rare, general questions that added no real value to the discussion between the two rivals.

In my opinion, the best of the four presidential and vice-presidential debate moderators of this election cycle was Martha Raddatz, the ABC journalist who led the exchanges between the two vice-presidential candidates, Joe Biden and Paul Ryan. She asked pointed, relevant questions, let the two debaters run the show while being very quick to intervene as soon as she deemed necessary. She was perfect.

One final word, to conclude this review of 2012 debates, on Candy Crowley who moderated the second debate between Obama and Romney. I usually enjoy her work on CNN, but I was disappointed by her intervention to check-fact in real time Mitt Romney’s statement re: the assassination of the American Ambassador in Libya. I think Candy Crowley ditched her role as moderator – which is not that of a referee – and made the mistake of correcting only one wrong assertion during the debate while several other statements would also have deserved to be corrected or clarified.

By correcting the only allegation that she was certain was inaccurate, she failed in her duty of neutrality. To be completely neutral, she should have either debugged all errors made by both debaters or debugged none of them. In fact, the partial nature of her knowledge made her partial. Naturally, the vast majority of journalists were delighted by the power assumed by Candy Crowley during her exchange with Mitt Romney, losing sight that the greatest power and the highest duty of journalists is to be as blameless as possible in their impartiality.

Book Review: "The Start-up Of You: Adapt To The Future, Invest In Yourself, And Transform Your Career" By Reid Hoffman And Ben Casnocha (2012, 272 Pages)