Twitter Is The Spark And Television Is The Fire

This is what the media coverage of the Ferguson protests once again demonstrates.

The Pew Research Center has released a very interesting analysis on the coverage of the crisis in Ferguson (Missouri) by Twitter and the television news channels (CNN, Fox News and MSNBC).

Twitter conversation about #Ferguson started very soon after the death of Michael Brown (an unarmed African-American teen shot dead by a white police officer) on August 9. The next day, 146,000 tweets about this drama were posted. On August 13 in the evening (East Coast Time), there were 4,500 tweets on average per minute chatting about Ferguson (see graph below).

Fox News and MSNBC began to cover the story in prime time on August 11 and CNN on August 12 (after two nights of riots). From that date, three days after the death of Michael Brown, the story became a subject of national importance.

The peak of media coverage – on Twitter and television news channels alike – was reached on August 14, after two reporters* were arrested and Barack Obama made his first official comment on the Ferguson crisis. 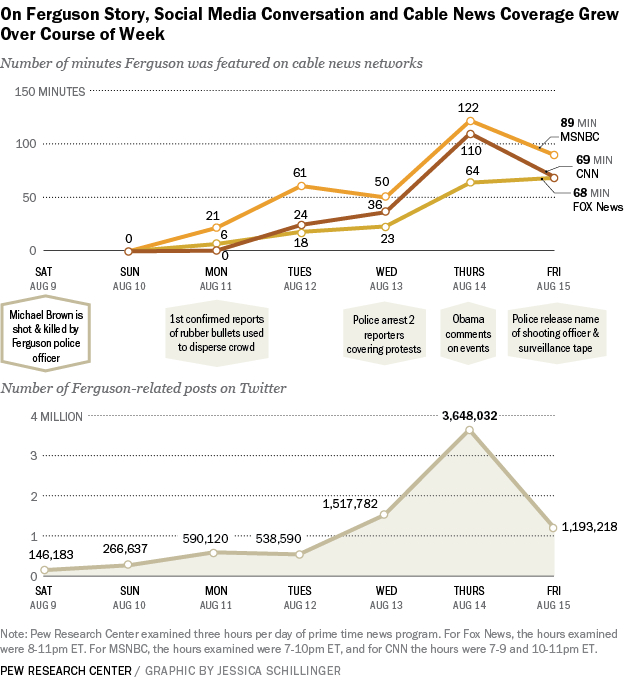 It is also instructive to compare the respective media coverage of the deaths of Michael Brown and Trayvon Martin (an unarmed African-American teen shot dead in Florida in February 2012 by George Zimmerman, a Hispanic resident who was patrolling his community).

The murder of Trayvon Martin echoed on Twitter only three weeks after the event, when the tape of Zimmerman’s 911 call was released by the police (see graph below). 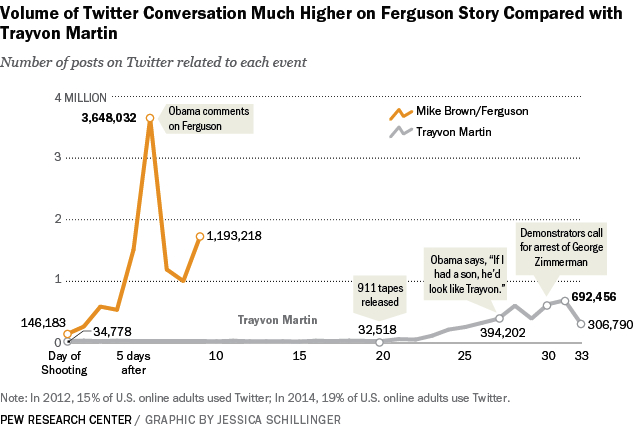 The other difference between the two events lies in the respective number of tweets that they generated in one day at the height of the online conversation: 3.6 million about the Ferguson crisis (August 14) compared with “only” 692,000 about Trayvon Martin’s death.

As my formulation implies, this gap results from the fact that the death of Michael Brown has caused riots in Ferguson, taking the tragedy to a whole new level. The Michael Brown death has thus become the Ferguson crisis.

This data confirms my idea that Twitter is the spark and television is the fire. Twitter conversations spark the interest of other media and of part of the general public (only 19% of online American adults use the microblogging network) on a topic, thereby generating virality. Then, from that spark, television ignites interest among the general population.

* Abusing journalists is still the most effective way to boost media coverage.

What Can Your Employees Be Proud About?