What can we learn from Robert F. Kennedy?

It seems to me that post-modern political elites tend to behave, on both sides of the Atlantic, more like mechanics than leaders. To them, every problem and every crisis must be solved by a mechanical solution, be it a law, a regulation or an administrative reform. Too often, vision and values are absent from their words and actions.

It might be due to the fact that this political generation, not having experienced war, has no sense of tragedy. Some would also consider that the accelerating pace of the media pays a role.

Still, the latter doesn’t prevent some business leaders to see far into the future even though Boards of Directors can be as unpredictable as voters, share prices fluctuate at the same rate as political surveys, and financial results are published more often than election results. 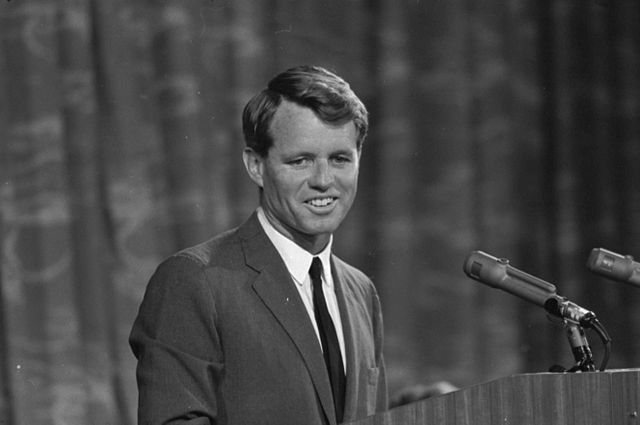 This morning, I played back the speech that Robert F. Kennedy (RFK), my hero, delivered on April 5, 1968 at the Cleveland City Club (see video below). Martin Luther King, Jr. had been murdered the day before, and America was plunged into a morass of self-doubt – fueled by the Vietnam War as well as major economic and social issues – during the 1968 presidential campaign.

Robert Kennedy was the only national leader – and, a fortiori, the only presidential candidate – to deal with issues of identity, vision and values. In his Cleveland speech, he presented the assassination of Martin Luther King not as a failure of the American political and administrative system but as a result of the deviation of Americans from their founding principles.

Instead of suggesting a systemic reform, he proposed an ontological repair. He promoted his vision and values throughout his campaign until his own assassination two months later when he certainly had just won the Democratic nomination for the White House.

As demonstrated by his accomplishments, Robert Kennedy was everything but a shallow idealist. He led his country to address some of the greatest challenges in its history. A people, indeed, needs as much to be guided as to be governed.

The same goes for corporate leadership. A business leader does not rally his employees by changing the structure of the organization, optimizing business processes and increasing performance management. They lead by developing a company vision and defending its core values.