What Role For Publishers In The New Media Value Chain?

Ben Thompson devoted an article on his blog to the role of publishers in the new media value chain created by the increasing dominance of major digital platforms.

Thompson elaborates on the concept of “smiling curve” created by Stan Stih, founder of Taiwanese computer maker Acer. It is “an illustration of value-adding potentials of different components of the value chain in an IT-related manufacturing industry. (…) Both ends of the value chain command higher values added to the product than the middle part of the value chain.” (see graph below) 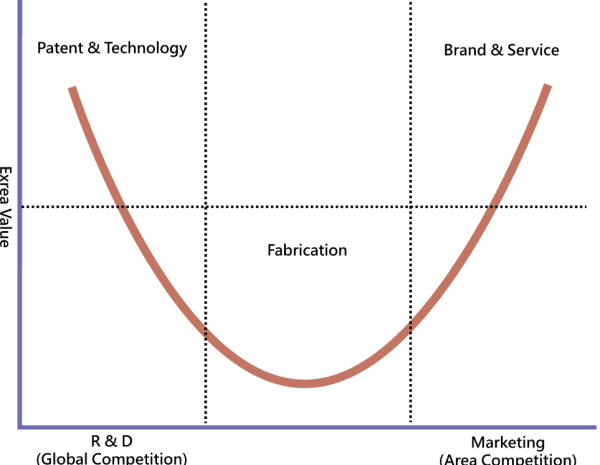 Thompson applies this principle to the media industry. In substance, he writes that publishers are at the center of the media value chain, while major digital services (Facebook, Google, Twitter…) and content creators are on both sides of the chain.

“When people follow a link on Facebook (or Google or Twitter or even in an email), the page view that results is not generated because the viewer has any particular affinity for the publication that is hosting the link, and it is uncertain at best whether or not their affinity will increase once they’ve read the article. If anything, the reader is likely to ascribe any positive feelings to the author, perhaps taking a peek at their archives or Twitter feed.

Over time, as this cycle repeats itself and as people grow increasingly accustomed to getting most of their ‘news’ from Facebook (or Google or Twitter), value moves to the ends. (see graph below)

This trend isn’t limited to publishing, either. Last week HBO announced that it was finally going direct to customers; while I think declarations that this decision will lead to cord-cutting are massively overstated, it is certainly a devaluing of the cable middle person.” 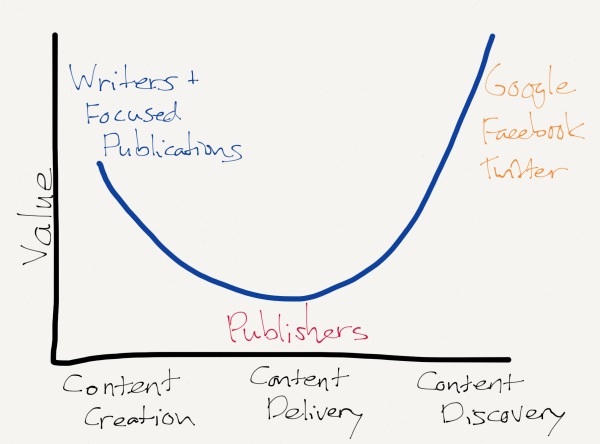 Overall, I can only agree with Ben Thompson’s analysis since it converges with several trends that I have discussed on Superception, first and foremost the evolution of the concept of media, the creation of personal brand journalism businesses, the success of anonymous content producers on sharing platforms, the increasingly tough economic equations facing the written press, the rise of native advertising, and the creation of media entities by brands.

However, I will offer three comments in order to make Thompson’s view less deterministic: