What Future For Industry Events In The Digital Age?

The gathering of the hi-tech industry in Austin this week for South by Southwest (SXSW) reveals an obvious paradox.

While the decline of the use of industry events (exhibitions, conferences…) due to the advent of digital marketing is often proclaimed, Silicon Valley is at least as fond as other sectors of such operations. This confirms, if necessary, that digital and event marketing should be considered as complementary practices.

Beyond face-to-face networking, industry events present two incomparable marketing advantages in the digital age: Experience and influence. I use to say that, if you believe in the success of Apple Stores, you believe in the future of event marketing. The logic is indeed the same.

The exceptional experience offered by Apple Stores to their customers is unachievable online: The staging of Apple’s offering and (perhaps more importantly) image, the ability to test products and be trained to master them. Apple Stores also give consumers the feeling of having a unique influence thanks to their interactions with the “geniuses” who are at their disposal to solve their technical problems.

It is no coincidence that this service finds its inspiration in five-star hotel concierges whose work it is to satisfy the specific needs of their wealthy guests. The message conveyed by Apple to its customers is clear: You have as much influence as a VIP.

The 450 Apple Stores worldwide are the most compelling advertising billboards with a non-advertising purpose in the history of marketing. They promote Apple’s values through their design and customer service far more efficiently than any communications tool could. Incidentally, the eventful impact they create doesn’t only benefit Apple: They single-handedly lift sales by 10% at the American malls in which they operate.

Another comparison that I make to explain the mission of event marketing in the digital age is that events play the same role in the marketing mix than television in the media landscape.

The concept of “zero latency” describes the ability of television to create the same experience at the same time for millions of viewers. Industry events offer the same added value: They gather an industry’s players for the same experience. The latter can be created by the number of exhibitors in an exhibition, by the quality of speakers at a conference and/or by the range of demonstrations presented at a convention.

The unique experiences created by television in the media landscape and events in the marketing mix generate influence by the number of people they gather and the volume of conversations they spark – including on the social web. 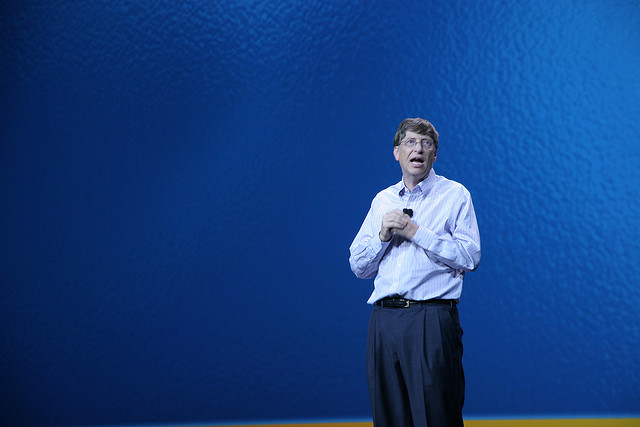 Gates, Ballmer and Zuckerberg can speak to the media whenever they want and capture an unmatched level of global attention. Yet they choose to speak at industry events that aren’t organized by their respective companies.

Their decision results from the fact that the Consumer Electronics Show and the Mobile World Congress are each gathering an entire industry in a single space, thereby creating experiences that generate an influence that even Microsoft and Facebook, despite their marketing power, can not achieve by themselves*.

As a matter of fact, both companies face, ten years apart, the same problem in the consumer electronics and mobile communications markets respectively: Being perceived as a member of the industry.

Microsoft, the king of professional IT, has used CES as an echo chamber for fifteen years in order to reinforce its legitimacy in the consumer electronics ecosystem. Facebook, the social network born on PCs, makes the Barcelona pilgrimage in order to fit in a mobile sector that is increasingly worried by its ambitions.

You might object that a few disruptive technologies have the potential to deal a severe blow to industry events. I believe instead that they will give them an extra echo. I will, here also, use two examples.

Virtual reality, whose success will rely on the commoditization of systems such as the Oculus Rift headset, will enhance the experiences created in industry events rather than diminish their utility. We have seen in recent years the same phenomenon with augmented reality whose advent hasn’t led to the replacement of physical events by digital activities. Indeed, these technologies give a new dimension to experiential marketing. As such, they foster more conversations – and generate increased influence – around events.

I am convinced that the same logic will apply to live video streaming. As Twitter caught fire at South by Southwest in 2007, live-streaming mobile application Meerkat, which turns a smartphone into a mobile webcam, is catching fire in Austin this week.

South by Southwest attendees are using Meerkat to live stream to the whole world the sessions in which they participate. The exclusive nature of an event such as South by Southwest – which justifies its very high registration fees – is based on the fact that its sessions (with rare exceptions) are not, as in all industry events, broadcasted live.

I am betting that the unofficial broadcast made possible by Meerkat (and its competitors) will affect neither the prestige nor the profitability of industry events. My reasoning is threefold:

Industry events have not become out of age in the digital age. Digital and event marketing should be considered as complementary practices.

This is what also demonstrates the all-digital media that cover the hi-tech sector (Business Insider, Re/code, TechCrunch…). The events that they organize are a major source of income in their business plans. Incidentally, the conferences organized by GIGAom, the hi-tech news site whose closure was announced last week, are said to be its most valuable asset.

In this article, I took the example of the hi-tech industry because its reliance on industry events seems counter-intuitive. But all events, regardless of their industry and size, should use the same strategy in the digital age: Create unique experiences to generate influence. Obviously, these experiences can take many different forms from one industry and culture to another.

* Only Apple takes a different approach by relying exclusively on its own events.