This trend is illustrated by the tactic used by the NFL to rebut a New York Times investigative article.

In this piece, the Gray Lady claims that the NFL intentionally underestimated in its internal research the number of concussions suffered by players. The paper also says that there are important connections between the NFL and the tobacco industry, “which was notorious for using questionable science to play down the dangers of cigarettes.”

The NFL published a 2,500-word rebuttal to which the New York Times responded with a tweetstorm on Twitter. The choice of the microblogging platform was all the more relevant since it is the preferred social network for sports fans.

The media exchange between the most powerful national sports organization and the most prestigious newspaper in the world took a more original turn when, the day after the publication of the investigation, the NFL countered the New York Times on its own ground: It ran a series of banners on the newspaper’s website to highlight the actions it is taking to protect its players’ health. These banners were even posted on the web page of the article that they aimed at rebutting (see the screenshot shown below).

The NFL explained that it wanted to directly address the New York Times readers rather than have its messages tainted by the newspaper’s journalists. 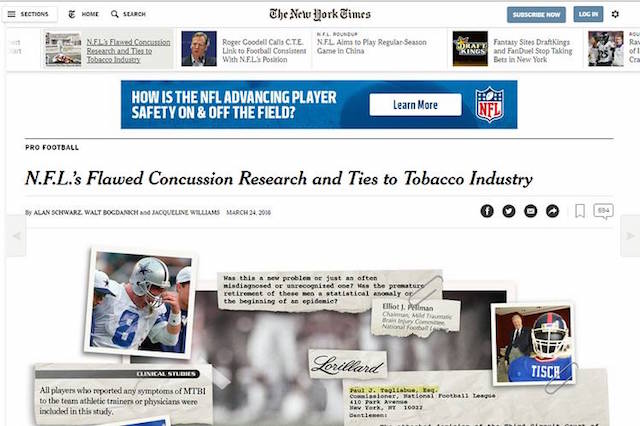 That is certainly not the first time that a brand is placing an advertisement in the media that it wants to fend off. But, more broadly, the battle between the NFL and the New York Times reflects an irreversible trend: Newsmakers can increasingly address their audiences without the media’s mediation. Obviously, nowhere is that trend more prevalent than on the social web.

The fact that the NFL is rich enough and the New York Times poor enough to let the former flood the latter’s website with ads to rebut one of its articles shows that the media’s mediation is retreating in the very space where it should best resist.

To conclude on a positive note, the NFL rebuttal strategy also highlights the threat still posed by a New York Times article.

To Live Is To Learn