And yet, Warren Buffett isn’t crazy.

The head of investment firm Berkshire Hathaway – and second richest man in America – explains its media strategy in his annual letter to shareholders published a few days ago. This is the best analysis of the situation and prospects of the newspaper industry that you can read.

“During the past fifteen months, we acquired 28 daily newspapers at a cost of $344 million. This may puzzle you. (…) News, to put it simply, is what people don’t know that they want to know. And people will seek their news – what’s important to them – from whatever sources provide the best combination of immediacy, ease of access, reliability, comprehensiveness and low cost. The relative importance of these factors varies with the nature of the news and the person wanting it.

Before television and the Internet, newspapers were the primary source for an incredible variety of news, a fact that made them indispensable to a very high percentage of the population. (…) Your paper contained so much you wanted to learn that you received your money’s worth, even if only a small number of its pages spoke to your specific interests. Better yet, advertisers typically paid almost all of the product’s cost, and readers rode their coattails.

Additionally, the ads themselves delivered information of vital interest to hordes of readers, in effect providing even more “news.” Editors would cringe at the thought, but for many readers learning what jobs or apartments were available, what supermarkets were carrying which weekend specials, or what movies were showing where and when was far more important than the views expressed on the editorial page.

In turn, the local paper was indispensable to advertisers. If Sears or Safeway built stores in Omaha, they required a “megaphone” to tell the city’s residents why their stores should be visited today. (…) With no other megaphone remotely comparable to that of the newspaper, ads sold themselves.

As long as a newspaper was the only one in its community, its profits were certain to be extraordinary; whether it was managed well or poorly made little difference. (…) Over the years, almost all cities became one-newspaper towns (or harbored two competing papers that joined forces to operate as a single economic unit). (…) When competition existed, the paper that gained a significant lead in circulation almost automatically received the most ads. That left ads drawing readers and readers drawing ads. This symbiotic process spelled doom for the weaker paper and became known as “survival of the fattest.”

Now the world has changed. Stock market quotes and the details of national sports events are old news long before the presses begin to roll. The Internet offers extensive information about both available jobs and homes. Television bombards viewers with political, national and international news. In one area of interest after another, newspapers have therefore lost their “primacy.” And, as their audiences have fallen, so has advertising. (Revenues from “help wanted” classified ads – long a huge source of income for newspapers – have plunged more than 90% in the past 12 years.) 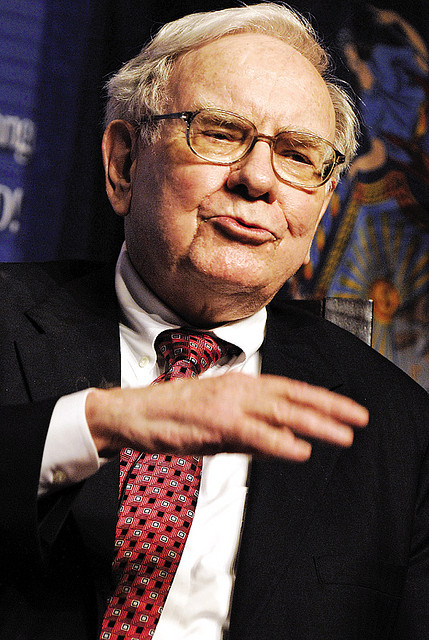 Newspapers continue to reign supreme, however, in the delivery of local news. If you want to know what’s going on in your town – whether the news is about the mayor or taxes or high school football – there is no substitute for a local newspaper that is doing its job. (…)

Even a valuable product, however, can self-destruct from a faulty business strategy. And that process has been underway during the past decade at almost all papers of size. Publishers – including Berkshire in Buffalo – have offered their paper free on the Internet while charging meaningful sums for the physical specimen. How could this lead to anything other than a sharp and steady drop in sales of the printed product? Falling circulation, moreover, makes a paper less essential to advertisers. Under these conditions, the “virtuous circle” of the past reverses.

The Wall Street Journal went to a pay model early. But the main exemplar for local newspapers is the Arkansas Democrat-Gazette, published by Walter Hussman, Jr. Walter also adopted a pay format early, and over the past decade his paper has retained its circulation far better than any other large paper in the country. (…) Whatever works best – and the answer is not yet clear – will be copied widely.

Charlie and I believe that papers delivering comprehensive and reliable information to tightly-bound communities and having a sensible Internet strategy will remain viable for a long time. We do not believe that success will come from cutting either the news content or frequency of publication. Indeed, skimpy news coverage will almost certainly lead to skimpy readership. (…) Our goal is to keep our papers loaded with content of interest to our readers and to be paid appropriately by those who find us useful, whether the product they view is in their hands or on the Internet. (…)

Our newspapers are certainly not insulated from the forces that have been driving revenues downward. Still, the six small dailies we owned throughout 2012 had unchanged revenues for the year, a result far superior to that experienced by big-city dailies. Moreover, the two large papers we operated throughout the year – The Buffalo News and the Omaha World-Herald – held their revenue loss to 3%, which was also an above-average outcome. (…)

Berkshire’s cash earnings from its papers will almost certainly trend downward over time. Even a sensible Internet strategy will not be able to prevent modest erosion. At our cost, however, I believe these papers will meet or exceed our economic test for acquisitions. Results to date support that belief. One daily paper that we acquired in a bulk purchase from Media General was significantly unprofitable under that company’s ownership. After analyzing the paper’s results, we saw no remedy for the losses and reluctantly shut it down. All of our remaining dailies, however, should be profitable for a long time to come. At appropriate prices – and that means at a very low multiple of current earnings – we will purchase more papers of the type we like.”

To Which Extent Should Journalists Take The Public Perception Into Account?