For Or Against Using Tweets In Ads?

Yesterday, the New York Times published a full-page ad (see below) for Joel and Ethan Coen’s movie “Inside Llewyn Davis” (produced by CBS Films). The ad, run ahead of next Sunday’s Golden Globes, features a tweet from Anthony Oliver Scott, the Times‘s famous film critic. 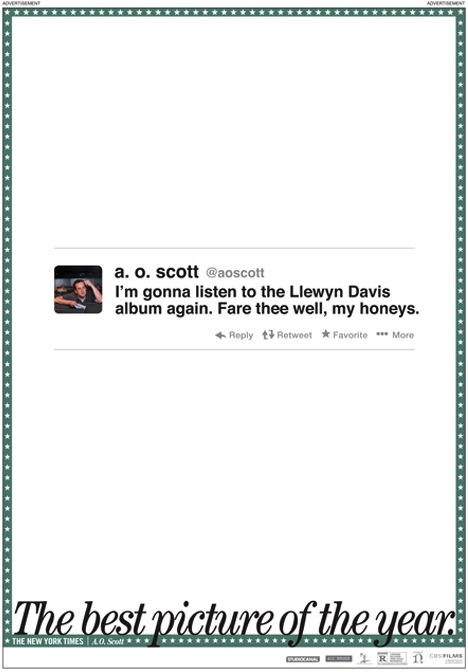 Was A.O. Scott aware that his tweet would be used in an ad?

The answer to this question is not clear because of Scott himself.

He called the ad “a bit of a surprise” on Twitter and, asked whether CBS Films had asked him permission to use his tweet, replied: “Kind of.”

It depends on the answer to the first question.

Indeed, as many observers have noted, Twitter’s guidelines for using Tweets in broadcast spell out that “without explicit permission of the original content creator, Twitter content may not be used in advertising.”

Is it alright to use a tweet in an ad?

Yes, in my opinion it is.

Tweets – I am referring here to written tweets and not to pictures, videos and other media attached to tweets – are posted on Twitter precisely to share opinions with no control on the way they will be reproduced or used. From the copyright standpoint, a social network does not operate like a blog. In addition, in the case of a film critic, A.O. Scott’s tweet can be likened to a quote from one of his New York Times‘s articles. As a matter of fact, it is a common practice that movie review quotes be used in ads and commercials.

The only potential problem I may have with this ad is that CBS Films has edited A.O. Scott’s tweet. Editing a tweet to serve commercial purposes is unethical. However, as A.O. Scott pointed out on this Twitter feed, his tweet has been modified in order to comply with one of the Golden Globes’s rules that an advertisement for a movie should not mention a competing feature.

The question therefore is whether the tweet included in the ad accurately reflects A.O. Scott’s opinions. As the reproduction below of his initial message shows, this is clearly the case. We can even consider that the tweet featured in the New York Times is less unfavorable than the original one for the other motion pictures (musical or comedy) nominated at the Golden Globes.

Last but not least, I cannot help but point out how ironic it is that CBS Films considered that an ad in the New York Times would be more efficient than a retweet and a social media campaign to publicize A.O. Scott’s tweet.

Who said newspapers were dead?