It depends on what television we speak of.

As I have often explained on Superception, it is necessary to differentiate between television as an equipment (with which we consume entertainment other than television programs) and a medium (which is increasingly broadcasted on other platforms).

A Nielsen study found that the former is declining while the latter is growing.

On average, Americans watch programs on their television set for 4 hours and 31 minutes per day. That is twenty minutes less than two years ago. In contrast, consumption of TV programs on digital media has increased significantly – as shown in the graph reproduced below. 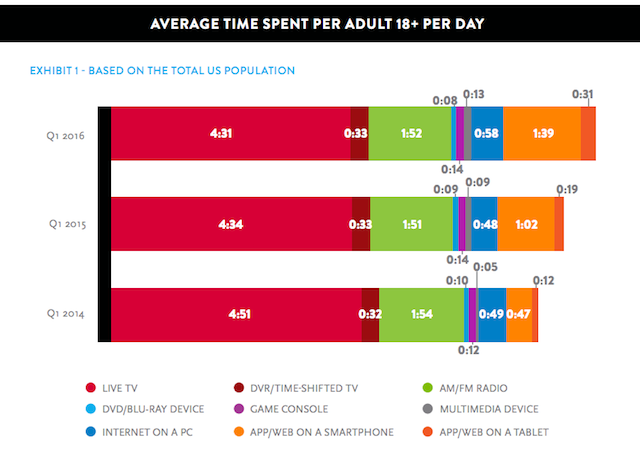 For example, the time spent viewing TV programs on smartphones and tablets has more than doubled in two years. Similarly, for the first time, more than half of US households pay a subscription to a streaming service such as Hulu or Netflix.

As a consequence, the total time of television viewing has increased by an hour over the past year.

Last but not least, the Nielsen study confirms that millennials, even if they aren’t the most television-hungry generation, have not abandoned it altogether. They devote an average of 4 hours and 8 minutes a day to watching television programs on different platforms.

Book Review: “Trailblazer: The Power Of Business As The Greatest Platform For Change” By Marc Benioff With Monica Langley (2019, 272 Pages)

Why Elon Musk Is Unique