Is The New Reality Of Media Hindering Democracy?

Monetization issues are at the heart of the problem: Digital advertising’s business model doesn’t work much better than that of print media.

The failed promises of digital advertising

Last week was a “septimana horribilis” for digital, advertising-based media:

Without even mentioning the growing popularity of ad blockers, the main reason for those troubles lies in two words: Facebook and Google. The two web giants are taking almost all the growth in the U.S. digital advertising industry, forming an increasingly powerful duopoly in that market.

Their supremacy increases each year, which creates a virtuous cycle for their benefit: The more Facebook and Google garner advertising revenues, the more they collect user data, which helps them better target their ads, which in turn allows them to increase the effectiveness of their campaigns and, as a result, grow their revenues. It is therefore becoming always more difficult for other players to compete with Facebook and Google, which are expected to capture half of all worldwide advertising revenues this year.

Admittedly, Axios has recently raised $20 million. But many other digital media have failed to generate revenues after receiving substantial funding. It is therefore too early to claim victory for Axios.

In truth, the fate of advertising-based digital media outlets is increasingly determined by a single criterion: Size. Incidentally, the fact that Amazon may emerge as the only viable competitor of Facebook and Google in that realm is an additional alarming trend for said outlets. 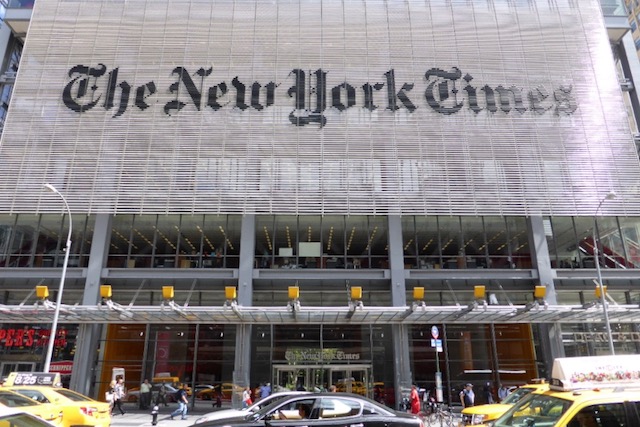 In many cases, the revenues (advertising and subscription) generated by newspapers and magazines no longer cover their production and distribution costs.

In a recent interview, Mark Thompson, the New York Times’ CEO, gave an update on the digital transformation of the Times, a topic that I have addressed in a Superception Podcast episode with David Leonhardt, the Pulitzer-Prize winning op-ed columnist who led the paper’s 2020 Group on the future of the newsroom.

The New York Times is (so far) successfully implementing a subscription-first growth strategy:

Mark Thompson quietly envisions the future of the New York Times without a print edition. In a revealing way, he calls that scenario “accepting reality.”

That new reality – the decline of both advertising and paper – could prove detrimental to democracy, which is based in part on the quality, or at least the veracity, of the news consumed by citizens.

But, as Jonah Peretti, cofounder and CEO of BuzzFeed, recently explained:

“If you’re thinking about an electorate and people being informed, the subscription model in media doesn’t help inform the public. […] It’s a huge question for society and democracy. If Google and Facebook take all of the revenue but don’t want to pay for the fact checking, reporting, more-intensive investigations, who does that work?

If it’s only subscription services, that’s a big challenge. […] It isn’t tenable that the only people getting quality news will be 2 percent or 5 percent or even 20 percent of the public.”

Jonah Peretti highlights a risk that I haven’t sufficiently taken into account when promoting a subscription-based monetization model as one of the ways to fund journalism.

In fact, as I have already explained on Superception, people get the media they deserve. If they don’t pay for journalism, they won’t be properly informed.