The sudden rise to stardom and fall from grace of Kenneth Bone, one of the undecided voters who questioned Hillary Clinton and Donald Trump during their second debate, reveals a worrying trend for the media.

By making Ken Bone a star, the American people and media may have been looking for a sense of normalcy in the most abnormal debate of their political history. The result was that his red sweater sold out on e-commerce sites and the breakout star landed an Uber endorsement deal and a tee-shirt contract.

But, after a few days of glory, which culminated in an Ask Me Anything session on Reddit, his fall was as swift as his rise had been meteoric. Gizmodo found in his digital footprint that he had written that Trayvon Martin’s death was “justified” and had made pornographic comments. Bone was then pilloried by the media.

This story highlights one of the most negative effects of the digital, social and mobile revolution: The endless multiplication of media entities and individual commentators on the Internet that is made possible by the zero cost of producing and distributing digital content. This evolution is positive for freedom of speech and negative for democracy. 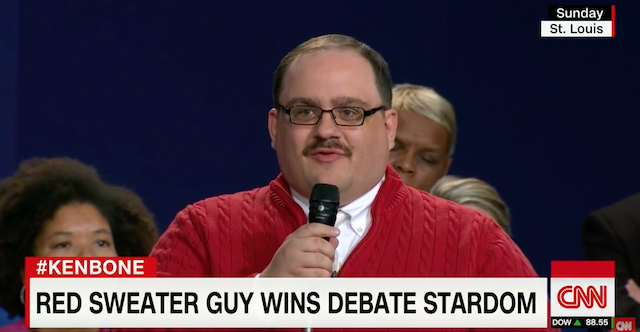 Indeed, for these media entities to exist, they need to produce endless content. Obviously, the more content production increases, the more its average value decreases. Too much journalism kills journalism.

The issue is that bad journalism is contagious: For fear of being disconnected from the general public, news media behave as tabloids (see CNN’s screenshot above). Information overload generates an information deficiency.

Incidentally, brands that develop content marketing strategies run the same risk. They must ensure that their content production keeps promoting their values and positioning as it grows in volume.