While it is often neglected by B2B corporations, branding is the main asset of B2C companies.

A brand allows to attract and retain talents, as exemplified by Southwest, build loyal customer/fan communities (Harley-Davidson), sell one’s products and/or services at a premium (Apple), and generate superior returns for investors (Tencent).

Those four B2C companies, like all the brands that appear in the BrandZ ranking of the top 100 most valuable global brands (see below), benefit from major advantages over their competitors in terms of human capital, revenues, profit, and valuation. 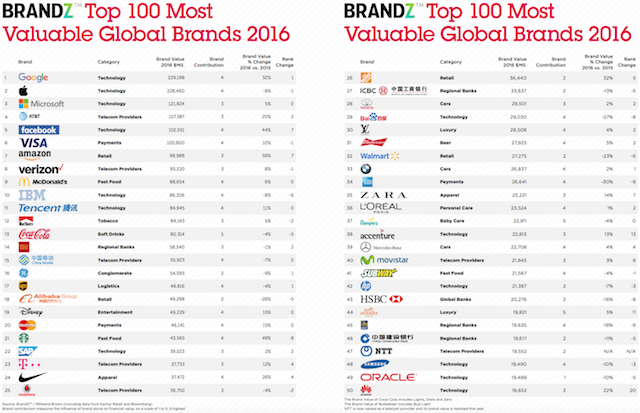 Still, only three B2B companies (I.B.M., GE and SAP) appear in that ranking.

Of course, B2C companies have an inherent advantage in terms of brand equity because of the direct impact of their brand on their sales. But B2B corporations have always devoted less attention and energy to the development of their brand.

This is due in particular to two major differences between B2C and B2B companies:

As a result, B2C companies focus their marketing and communications activities on branding while B2B corporations prioritize demand generation strategies.

In addition, B2C companies’ brand management is generally unified, while that of B2B corporations is fragmented. That difference stems from their opposing approaches to branding: B2C companies manage their brand based on internal factors (the messages they want to communicate to consumers considered as a whole), whereas B2B corporations manage their brand based on external factors (the specificities of each market segment on which they operate).

In doing so, B2B corporations often indulge in what Sigmund Freud called “the narcissism of small differences”. As a matter of fact, if one considers their religious and political affiliations, consumers are far more different from each other than B2B customers. The fragmentation of B2B brands has therefore no justification.

Last but not least, the mismanagement of branding by B2B corporations often results from the low influence of their heads of communications. It is due to the smaller impact of B2B brands on sales. This is also why B2B corporations are more lax with brand management than with customer outreach, public affairs, or investor relations.

Indeed, the audiences of all brands – not only B2C ones – are now active on the social web. Hence, the image of a B2B corporation in the public directly influences the perception of all its internal and external stakeholders. If it continues to manage its brand in a fragmented manner by conveying different meanings and identities, it faces unprecedented risks.

The distinction between B2C and B2B companies will soon disappear in marketing and communications.