Which component is the most critical to success in the digital, social and mobile era?

In an interview with the New York Times, Jeffrey Katzenberg, the former co-founder and head of DreamWorks Animations, has a very interesting answer:

“We’ve all grown up with this idea that content is king. And I realized, it actually isn’t. Content is the king maker, it’s not the king. The king is the platform. HBO is the king. Netflix is the king. Spotify is the king.”

These days, Jeffrey Katzenberg is meeting with potential investors to raise 2 billion dollars for his new start-up that aims at creating a platform to distribute high-quality video content1 on smartphones.

As a result of the digital, social and mobile revolution, it is difficult to distinguish the respective roles of platforms and content in media success. It is like the chicken and the egg.

That triple revolution makes the distribution of content (and the production of a large portion of it) free. Consequently, there is an overabundance of content to choose from online. To navigate that sea of information and entertainment, Internet users have increasingly resorted to major aggregation and curation platforms, first Google and then Facebook2.

That same logic has spread to each type of content whose consumption has gradually been dominated by one or two digital platforms. When the volume of content is unmanageable, the ability offered by digital platforms to find needles in a haystack is decisive. Thus, in many markets, they have come to dictate the demand. 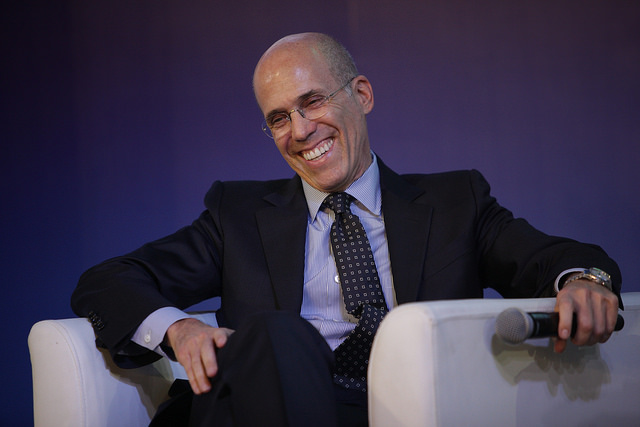 However, these platforms, as dominant as they are, can’t thrive without content: Google has developed its Android operating system to notably have access to ever more user information and thus foster the performance of its services, Facebook is willing to pay content producers so that they distribute their videos on its new “Watch” feature (as it previously did for Facebook Live), Netflix will invest 7 billion dollars next year in content creation, and Spotify and Apple Music are competing for exclusive content deals worth several millions of dollars. Indeed, a platform can quickly lose its appeal if it is not continuously updated with new interesting content.

The most powerful digital platforms can partly overcome that difficulty. Their power essentially stems from two elements: Network effect and user experience. The latter is often the condition of the former, as shown by Twitter’s failure to get out of its (big) niche. These two elements are the reason why Instagram is gaining market share on Snapchat by offering its members features similar to those of the ephemeral mobile application.

Said power also explains that the number of journalists who have been able to develop their individual brand independently from mainstream media is far less important than could be predicted a few years ago. Nowadays, journalists and analysts who, without the support of a platform (be it a digital player or a legacy media outlet), can easily monetize their content can be counted on the fingers of one hand3.

The example of Maggie Haberman is enlightening in this respect. The best political reporter of her generation, who works for the New York Times and CNN, has more than 640,000 subscribers on Twitter. She enjoys an unusual visibility for a journalist who reports the news but doesn’t comment on it. She is an invaluable asset for the New York Times’ strategy of enlisting a growing number of subscribers to offset the decline in its advertising revenues. But she could not survive financially if she didn’t benefit from the echo chamber provided by the Times. In a world of aggregation, strong brands prevail.

Another phenomenon demonstrates the influence of major platforms in the digital, social and mobile age: Brands are increasingly creating their own media outlets to have ways to directly address their target audiences which are overwhelmed by information overload. Indeed, not only have major social platforms captured the attention of corporate audiences, but they have also given them the opportunity to have the same impact as corporations on the web.

Most companies respond by developing brand content strategies that they deploy on the social web. And some go so far as to create their own media outlets to control the distribution of said content.

Sometimes you have to be more royalist than the king.

1 Katzenberg wants to create video productions at a cost of $100,000 a minute.

2 The analyst Ben Thompson has introduced the concept of “Aggregation Theory” on that subject.

3 Ben Thompson is one of them.