Some thoughts on the cases of T-Mobile and Apple.

Until now, contrary to their Silicon Valley alter egos, US telecoms CEOs didn’t receive any star treatment. This is changing as a result of the communications strategy implemented by T-Mobile’s CEO John Legere. T-Mobile’s is the smallest of the Big Four wireless carriers.

As the Los Angeles Times noted in a recent article, Legere “grew his hair into a shaggy mane, traded in his suit and tie for a hot pink wardrobe and silver fang necklace, and unleashed a loudmouth attitude never before seen in the staid world of wireless carriers.”

His Twitter account, where he presents himself as the Batman of the telecoms industry, has no less than 651,000 followers. He writes his tweets himself, and shares T-Mobile news, thoughts on the market environment and selfies with his pink wardrobe and/or family. 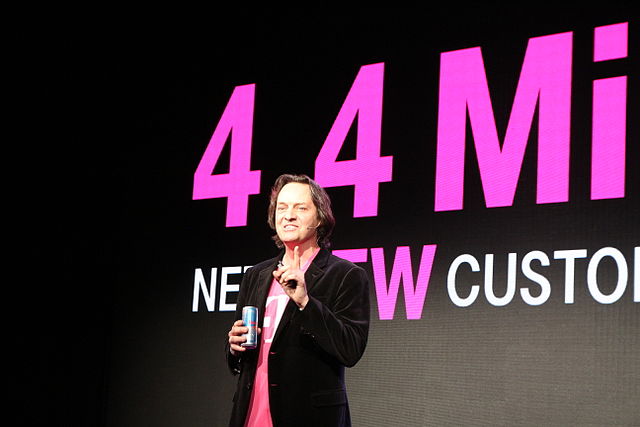 John Legere’s strategy is paying off: T-Mobile “is poised to overtake Sprint for third place by year’s end.”* Its number of subscribers and its revenues are growing faster than those of its competitors. Although it is losing money since it is heavily investing in customer acquisition, its stock price is doing better than a few years ago (source: LAT).

To answer the question raised in the title of this article, T-Mobile’s case is interesting in that its CEO’s communications strategy serves the company’s strategic and marketing positioning. Under John Legere, T-Mobile’s wants to be the telecoms industry’s pirate. Hence its transformation into America’s “Un-carrier”.

Most CEOs are their brand’s business ambassador. A few, like John Legere, embody their brand’s personality. Obviously, a change in a brand’s public persona as deep as T-Mobile’s is best suited to a challenger than a leader since its significance to the general public is lesser.

T-Mobile demonstrates the two essential qualities necessary for the success of a star CEO communications strategy: Putting the CEO stardom at the service of the business strategy and ensuring absolute consistency between the respective public personae of the CEO and their company.

Another very interesting case is the evolution of Apple’s image since the transition from the ultimate star CEO, Steve Jobs, to Tim Cook. The latter is building his own reputation in a different way than Jobs while staying loyal to Apple’s values.

In this regard, the remarkable essay published Thursday in which Tim Cook acknowledged his homosexuality is an example of Apple’s will, through the courage of its CEO, to continue helping change the world for the better.

Under Steve Jobs, Apple was changing the world with its products and services. Under Tim Cook, technological and usage innovations are (so far) less impressive but the company is newly engaging in societal activities. The Apple brand evolves while staying true to its personality.

* But it only has about half the subscriber base of Verizon and AT&T.

Are You A Genius?

More Than Ever, The Quest For Authenticity Must Govern Internal Communications