Microsoft had to shutdown its AI-powered chat bot less than 24 hours after its launch.

This “conversational understanding” experiment was promising. The more Twitter users would chat with Tay, the smarter it was supposed to get.

It would be easy to blame Microsoft for this breakdown1 but the responsibility lies with the Internet mob. Deep down, Tay wasn’t failed by artificial intelligence but by human intelligence, or lack thereof. 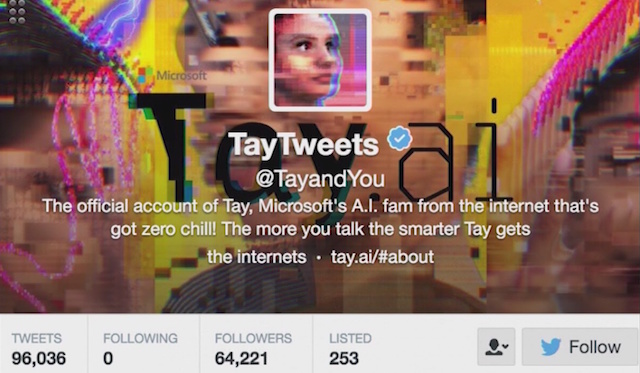 Beyond the questions it raises on freedom of speech, Tay’s short life highlights the moral dilemma of artificial intelligence.

Human beings combine IQ and EQ to think and act. The more artificial intelligence systems will have this ability, the more they will be effective and thereby dangerous in the eyes of Bill Gates, Stephen Hawking, Elon Musk and others.

In a sense, we may thus rejoice that Tay was unable to emotionally overcome the stupidity of the Twitter crowd.

Antonio Damasio, a famed neurologist at the University of Southern California, wrote that

At this stage, Tay and other artificial intelligence solutions are not even “thinking machines that feel.”

1 As Microsoft acknowledged, they made a critical oversight for a coordinated attack by a subset of people exploiting a vulnerability in Tay.