At this stage, television networks use their audience data to lure advertisers but the data at their disposal is very limited compared to that available online. Similarly, broadcasters can’t yet dynamically insert ads in their content as is possible on the web.

Nevertheless, a study from eMarketer found that programmatic advertising has started to be used on American television in recent quarters and should experience very strong growth in the years to come (see the graph reproduced below). However, it is expected to represent less than 10 percent of total television advertising revenues or a few billion dollars per year. 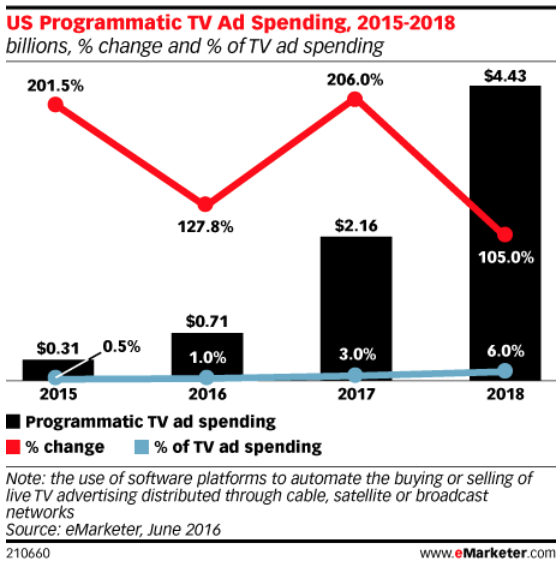 In the medium term, the growth of programmatic advertising on television will depend on progress made in (i) the high-scale automation of transactions and (ii) the foundation of this process on third-party audience data.

In this regard, a survey of US marketers conducted by WideOrbit reveals that better audience targeting (mentioned by 58 percent of professionals surveyed) is the first motivation for brands to adopt television programmatic advertising, far ahead of improved return on investment (14 percent) and increased automation of the transaction process (11 percent).

Indeed, while television offers a particularly wide reach, its imprecise targeting is its main weakness. Increasingly, the web, with a few notable exceptions such as Facebook, offers the opposite characteristics: Precise targeting at the cost of an infinite fragmentation.

That’s why the advent of programmatic advertising on television could change the competitive landscape between the two biggest media of our time.