The Management Lesson Of Joe Biden

A memo from the Vice President is making the rounds on the social web.

In it, he is asking his staff members to not sacrifice their family life (birthdays, anniversaries, weddings, religious ceremonies, graduations, illness, deceases…) to fulfill their professional duties. He even warns them that he will be very disappointed if he finds out that some of them put their work before their family. 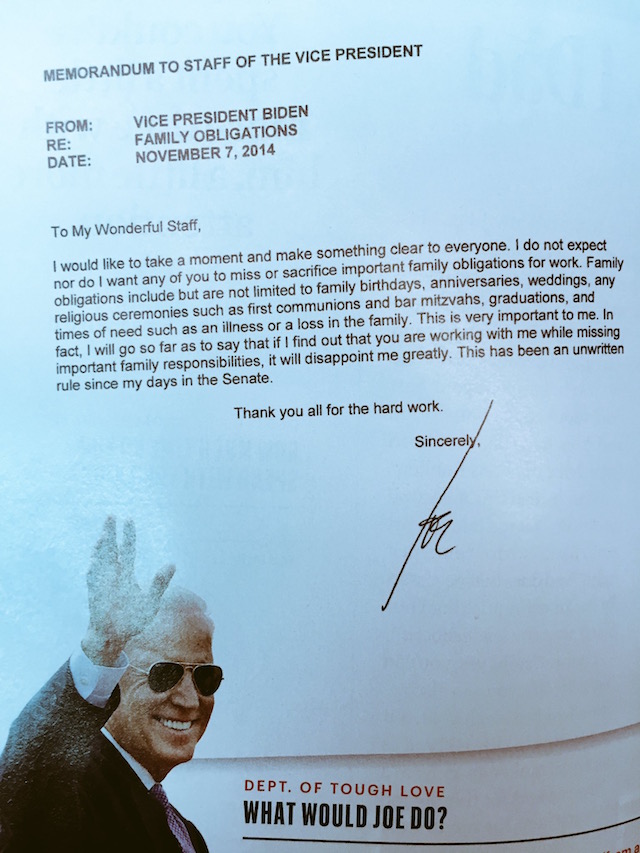 Joe Biden’s philosophy is certainly the result of his own experience of losing his wife and infant daughter in a car accident just after being elected to the U.S. Congress at 29 years old. And, in a tragic coincidence, his son Beau, a survivor of the car crash, died of brain cancer at 46 six months after his father sent that memo to his staff.

Regardless of its infinite decency, the principle defined by Joe Biden is also sound from a managerial standpoint for two reasons:

If the Vice President of the United States, one of the most prominent leaders in the world1, is able to be so sensitive to his employees’ emotions, all managers at all levels should be able to be as well.

1 That was not the case of all Vice Presidents in US history but it is certainly the case of Joe Biden in Barack Obama’s Administration.